Most horses have access to grazing for some or all of each day.  This is important for the health of the horse's digestive tract and for mental wellbeing too.  Unfortunately, there are quite a few plants and trees that are highly toxic to horses, and which could result in a vet emergency if consumed.

One such tree is the yew.  Yew trees form a part of many hedgerows and are extremely toxic to horses, even in small amounts.  So, how do you recognise yew poisoning, and what should you do if you think your horse has been affected?  Read on for some helpful advice.

How to recognise the yew tree

Yew trees are widely used in hedging and also as ornamental trees, particularly in temperate climates.  The yew foliage is dark green and has small, spiky leaves, similar to those of an evergreen fir tree.  During the autumn, the yew produces red berries.

Although it's easy to spot a yew when it's growing in tree form, the shrub version is easily overlooked when included as a hedging plant.

The whole of the yew tree is extremely poisonous to horses.  In fact, only a few hundred grams of fresh yew leaves can kill an adult horse within just a few minutes.  Horses affected by yew tree poisoning exhibit a variety of symptoms including:

If your horse begins to show any of these symptoms, you must call your vet immediately as an emergency.  Yew tree poisoning can be treated, but only if you are able to get your horse seen quickly by the vet.

Horses can easily eat yew accidentally when nibbling on other plants in hedging growing around a field.  When introducing your horse to a new field, always conduct a thorough inspection of the hedging and surrounding trees before you allow your horse to graze.  If you discover yew growing in the hedge, you must have it removed and destroyed.  Trees must be well out of reach of horses and their lower branches should be cut back so that the canopy is too high to be eaten.

Be careful too when out hacking and don't allow your horse to grab mouthfuls of foliage from either side of your path or from overhanging trees.

Yew tree poisoning is potentially fatal to horses.  Make sure that your fields are a yew-free zone, before you turn your horse out to graze.  If you think your horse has eaten yew foliage or berries, call your vet immediately as an emergency. 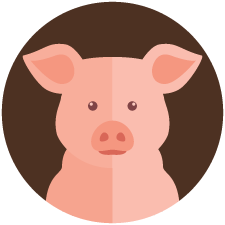 I have a miniature pet pig called 'Peppa'. She is a part of the family, and we love her so much. It's fun to have a pet as a pig because they are so smart and loyal. The only thing that can be an issue is that there are not as many resources out there on looking after pigs. Luckily, my local vet is an expert at looking after domesticated pigs and has given us some tips to keep Peppa healthy. I thought it might be useful to start a blog to help other pet owners looking at adopting a miniature pig.